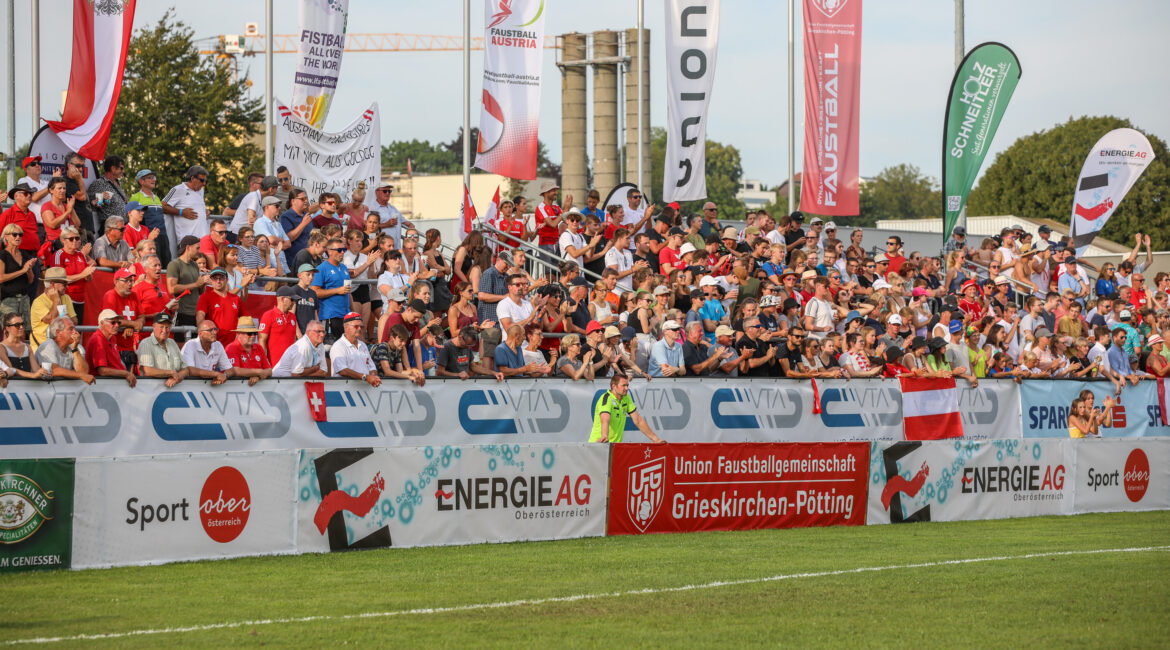 Big events like the IFA Fistball World Championships cannot be great events without the support of enthusiastic fans. They are the ones responsible for a great atmosphere and are also important motivators for the players on the field. Fan numbers are increasing day by day here in Grieskirchen. After the two-year corona break fans seem to have to offer a little bit extra motivation for their home team through chants and choruses.

European fanbases carrying their teams
First off, we have Swiss fans. “We are always here for our girls!”, three fans from the Rheintal declare. They have endured a five-hour journey to cheer for their teams. No trip is too far, according to their statement they “… travel around the world. Brazil, Germany, USA, Austria, you name it, we were there!” They are coming to the courts with their own equipment, too. In the stands they spur Switzerland on with goat bells, horns and waving flags. You will definitely be able to spot them in the game for the bronze medal against Chile, because according to them, “you just can’t overlook us.”
A German fan from Northern Germany can beat the Swiss’ five-hour journey. He has driven 850 km to be at the court here in Grieskirchen. “I’ll be there for any German fistball team, no exception.”, he tells us. His prediction for the finals today are 3:0 wins for Germany across the board. We are curious to see whether he is right. The U21 gold medal match takes place at 16:40 and the women’s at 18:10.
Home championships are important, so of course there are numerous Austrian fans in the stadium as well. Fans arrive in bundles: families, fistball teams, friend groups, you name it. Everyone seems to be making the trip to support the Austrian teams at high volumes. Generation-spanning choruses emerge as soon as it gets close for an Austrian team. The cheering when Austria wins, however, is probably the most emotional one of all. This spectacle could be experienced yesterday when an important milestone was taken: the women’s team beat Switzerland and fights for gold today against Germany. One fan remarks that she will give everything and support the Austrian teams with everything she has got.